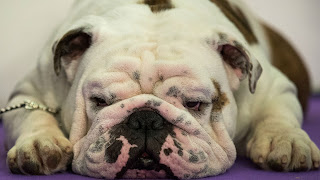 Dogs everywhere are reacting to the high-pitched notes  produced by the latest round of third graders issued those slim, but loud, musical instruments-- recorders.

"First of all, I wouldn't call them 'notes'," said Wilson, a shorthaired Terrier in Hopewell, New Jersey. "It sounds more like when my owner tries to sing along with Adele in the car. It's not pretty. I may move back into the dog house.”

Other dogs do not have that option.

Snickers, a rescue Beagle recently adopted by a family with third-grade twins, reported constant ringing in his ears ever since the boys brought home their instruments.

“I mean, it’s in stereo. As soon as one stops, the other starts. And what can I say? Would I rather be sleeping on a concrete floor in a kill-shelter? I don’t think so, but this…this is not what I expected when they told me I was moving to the suburbs.”

A representative from the Association of Concerned Dogs said the group has no official policy when it comes to dealing with the instruments. In 2014, Ralph, a spirited Pug from Lawrenceville with his own YouTube Channel,  created instructional videos on how to best destroy wooden recorders without getting splinters. Since then, schools have switched to issuing plastic instruments and Ralph has suffered from bouts of colitis.

Princess, a Maltese puppy, said she didn't understand how "homework" could involve anything besides sitting and rolling over and wearing barrettes in her fur.  As it stands, she's seen no improvement in behavior.

Like Girl Scout cookies, distribution of recorders is staggered across the country. Not all dogs have encountered the high-pitched sounds and squeaks of the wind instruments-- yet.